I guess it’s really fitting that recovery comes with the smiles and the kindness of family. I have the smallest family out of the group I’m with, but I still feel that caring big family vibe when I decide to count my extended family and my friends, and their families, and I think this sort of inclusion, if sometimes grating and bothersome as families can be, was wholly invaluable to our activities yesterday. I mean, the first thing we did was go to the mall on a Sunday.

Dolphin Mall is gigantic and gorgeous and sure, it’s ultimately a shopping mall, but it also has a Dave & Buster’s, a bowling alley, a mini-golf course, and a movie theater alongside its dozens of sit-down restaurants and food court. It is the largest value retail shopping center in the Miami-Dade County. Plus, I needed a swimsuit that wasn’t from Goodwill. (And a top and two skirts from Garage, which basically doesn’t exist where I live.) Which reminds me, I still don’t have clothes for St. Patrick’s day. I need to fit that in somewhere.

We proceeded to go to dinner with one of the group’s families, and surprising to me, if not to anyone else, that this was the activity that lifted that tension that had been cast on the trip. We went to Vapiano in the Miami Beach Financial District where my groupmate’s uncle works. And sure, Vapiano is technically a chain, and stationed all over the US and internationally, but the details don’t really matter to me when the food was great, and I see how happy everyone was. It was fulfilling, not just filling, dinner.

Vapiano table! I think the light is a UV light for the basil, mint, and rosemary plants they have just chilling on a shelf for us to take. If you’ve never tried freshly picked sweet basil, mint, or rosemary, then you’re seriously missing out. My friends were shaking their heads at me, but they just don’t get it.

I didn’t get anything at the bar because I felt it would be slightly inappropriate to turn into a lobster at the table, but the bar itself is vibrant and elegant, especially lit up by the Miami sun behind it. 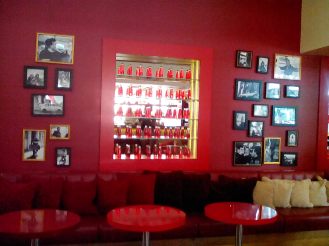 I’m not entirely sure why this wall exists, but it’s really cool.

This was my appetizer. Mm, carpaccio. 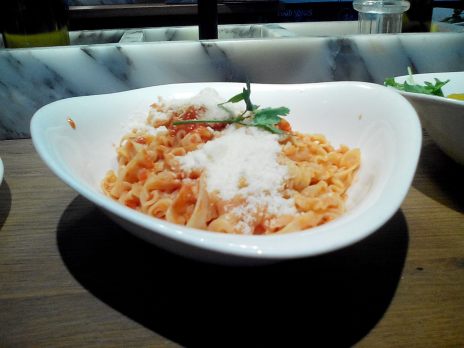 Arabbiata is probably my favorite simple tomato sauce. I was choosing between arabbiata and aglio e olio.

We tried to put money in this machine, but it was jammed. So we just gave some change to the first traffic beggar we saw. He seemed pretty happy about it.

We headed towards the bay to rest. I pet a lot of dogs.

Affogato at Gelato-Go on Ocean Drive.

Afters we hit up a spot a local had recommended to us called Bodega. It’s a taqueria place by day, amazing club space at night behind the wall. There’s a pool table, lush couches, balcony, and a swing. We probably spent at least an hour at the free pool table because I’m terrible at pool and the other two kept screwing up their last shots. We were maybe a drink in at that point, so I’m sure it seemed inexcusable to the patient people waiting in line that we were taking so freaking long, haha. The DJ was mixing a lot of older sounding material (think early 80’s funk and R&B mixed with just a little bit of 90’s R&B and synth), which was a good choice if the point wasn’t necessarily to get the “club jumping” but just to provide an exciting backbone to the conversations and activities of the night that a patron could also dance to if they felt like it. The people were probably the nicest we’ve met in this city so far and we had a great time sharing conversation and dancing with attractive strangers of all types that were all at least a foot taller than me and 20 pounds thinner under the filament lights and funky chandeliers.