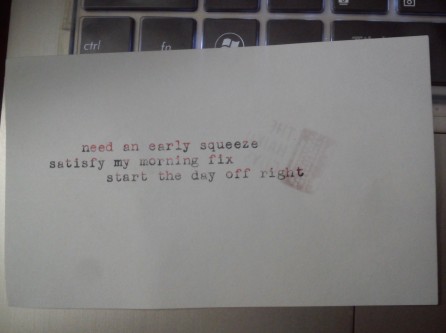 Today I said good bye to sleep and hello to…morning?

That’s right. I left at 5AM for a 6AM party on a boat in New York City filled with EDM music, costumes, juices, coconut water, tea, coffee, and KIND bars. And it was brilliant. There was a newscast from Univision talking to Spanish-speaking guests. CBC 2 was there, I think, and some other news channels as well.

The sunrise was gorgeous, and the boat took us past lower Manhattan to near the Statue of Liberty. There was a helicopter taking air shots and showing off above, and the sun gave everything this rich glow that I haven’t seen in months of sleeping in. All of the food provided was decidedly healthy; veggie juices, juices with chia seeds, Runa drinks, Chameleon Coldbrew, protein shakes, coconut water, and AMAzon coconut water/tea drinks (I linked the brands I remembered!) The only solid food I could find were the KIND bars, which was considered pretty healthy as well. I think they were helping sponsor, or had an ad spot because they weren’t just set on a table with everything else, and someone was physically handing them out.

And the party was crazy. Decent DJs, a fun, welcoming crowd, no judgment, great costume ideas, and a lack of fear of dancing.

It’s a party designed to give a great boost before the day starts, for 9-5ers and students alike, but I can’t help but think it’s all down hill from here. Ah well. Back to my regular life.