My feet were never as sore in Iceland, hiking up rocky trails and crossing channels of water, and simply being on my feet for 10 hours at a time, as they were wearing crappy shoes walking in NYC for a day. Never. My calves were upset with me, but my feet were perfectly content.

If you drive around the ring road, you will 100% see a waterfall. The big ones are a little ways away from the road but the smaller ones are just as charming and pretty. If you go to a waterfall or Snaefellsjokull, you will also 100% see a rainbow. I saw more rainbows in Iceland than I ever had in my entire life.

Some of them are wild. There were wild sheep on the roads. I tried to catch them.

I did pet a horse. She was really sweet. 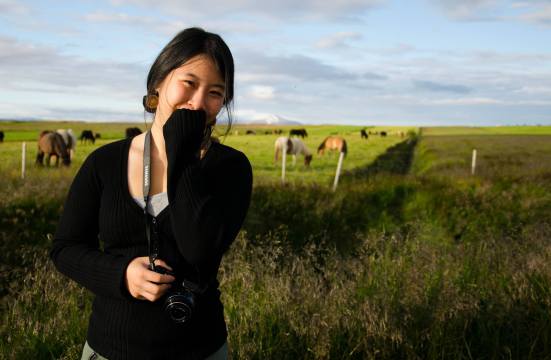 The Vikings were interesting, weird, don’t-give-a-fuck people with funny stories and legends. The historical and natural descriptions reflect a lot of humor, beauty, and pride, and I don’t think I read one description that was boring enough to stop reading.

It could be that Mr. Chokkattu and I were always lucky with our timing, and were willing to get up early and stay out late, but while there were usually other people around, if you weren’t in a big city, it wasn’t crowded. Even in the big cities, if you weren’t in a main shopping area, you were fine. We never ran into any traffic on the Ring Road, and there were always chances to pass slower drivers.

I didn’t think I had to attempt to speak comprehensible mandarin at all in Iceland (which is why I didn’t go with my mom to Hong Kong two weeks before) but I did. The Myvatn nature baths were full of the elderly. And when we went to the Vatnshellir for a tour we signed up for, an entire bus full of elderly people poured out and blocked the tiny hut entrance. So it goes.

Therefore, in going to the nature baths and having to take a naked shower before changing into a bathing suit and getting in, I saw way more elderly bits than I really wanted to. Not to mention when I walked back to my locker to dry myself, there was a mother with her two daughters standing in front of it. But no one else really seemed to mind.

I have realized that my hair is so straight that even if I don’t brush it for days (because I forgot to bring a brush and never bothered to go buy one) it basically doesn’t even matter.

In Iceland, normal car gas is referred to as “bensin” just like the Brits and Australians say “petrol.” Keep that in mind lest you confuse the Icelanders you’re talking to. But diesel is apparently diesel everywhere.

I’m not going to go into detail on this just in case there was a retro-hearsay clause on our contract, but if the inspector says “no damage”, then no damage! Huzzah!

All the people we spoke to seem excited about most things, and he Icelandic ones have a distinct, almost staccato speaking style that is both endearing and unendingly amusing. Our AirBnB hostess cleaned out her apartment a ton for me because I’m allergic to cats, and then let us borrow pillows and comforters for the road. We were given food after the kitchen closed, led to a gas station where a car of people then helped replaced the tire on another car, and had restaurant workers call hostels and other temporary living quarters twice. We were comped on dessert once. I had fun with an intake officer at the airport on the way home. It was amazing.

Seriously, they all know each other. If you’re in a bind and you really don’t want to spend a night in the car, when you go to dinner, ask your waiter or waitress and either they, because a lot of restaurants are so small that the owner also waits tables, someone back there will be able to help you out.

We had like two of these each at the airport.

Prince Polo/Prins Polo has been the most sold chocolate bar in Iceland for a really long time. Mr. Chokkattu and I finally tried one when we were back in Reykjavik and we immediately regretted not buying them sooner. They’re very simple, but they’re addicting. I’m craving one right now and am incredibly sad that I can’t go to Quikcheck and pick one up. When the locals tell you to eat something, even if it doesn’t seem special, just eat it.

I admit that it’s not just the US. I’ve had sickeningly sweet food from a lot of different places, and as someone who grew up with southern Chinese food, I am wayyy more partial to grease, salt, and oil than to a gratuitous amount of sugar. The Prince Polo candy bar? Delicious, but not sugary sweet; the US’s closest comparison would be a regular Kit Kat bar. At 42 grams, it has 21 grams of sugar; a Prince Polo is 36 grams, and only 14 grams of sugar (it IS still candy after all.) At 86% the mass, the sugar content should be around the same, right? The Prince Polo only has 2/3rds the sugar of a Kit Kat. And it tastes way better. There was also no sugar added to the smoothies we had, and the flavored yogurt was always still refreshingly tart.

Now this isn’t a direct criticism. After all, getting imports is much harder for Iceland, and the necessity for self-grown material is much greater, not to mention the ingredients they do grow inland (and catch outland) don’t have to go through as much transport time as the country is as big as a medium-sized USA state, and smaller than a lot of our medium sized states by some margin as well. But seriously. Every restaurant we visited baked their own bread or grew their own vegetables or had a deal with a local farmer for eggs and dairy. That happens so little in the US that it’s something to be highlighted and celebrated.

It is so okay to just use non-wheat flour that one of Reykjavik’s most touristy (but tasty, organic, and if there’s a wait, it’s not too long, definitely visit!) spots, Icelandic Fish & Chips just doesn’t use wheat batter, and they don’t advertise it either. They use spelt, which in their recipes produces a very light, crispy coating very unlike a lot of the heavy battered fish I’ve had in the past.

There are so many random blind spots all over my suburban-urban US life. Not to mention my GPS signal gets lost on the highway. I had service almost constantly in Iceland, and our GPS signal was lost ONE TIME. And thank you T-Mobile global plan for being the most convenient thing ever. Who needs to call someone these days anyway? Just gimme that sweet, sweet data.

Expect something tenuously related to Iceland but not an Iceland post because this is the last Iceland post (WHOOT!) soon!