License plate summary of my trip.

END_OF_DOCUMENT_TOKEN_TO_BE_REPLACED

Check out this wonderful video Mr. Chokkattu made of our time in Iceland!

Both Jonsi’s Helmgilas and Phoenix’s Love Like a Sunset were songs we played over and over driving through the country and I think Iceland’s beauty can really only be underlined by someone from there. We both miss Iceland dearly, and personally, for me this video is a tribute to happiness.

I said I wouldn’t make a directly Iceland related post, so this post is not about Iceland (though I am absolutely going to use a ton of the same tags.) Instead I wanted to make a little tribute to my level-headed and adorable travel mate, Mr. Chokkattu.

In the kayak, Seyðisfjörður

Not only was it his idea to go to Iceland despite my original hesitation and ignorance, he helped make the trip worthwhile by being his kind, patient, sweet, wonderful self.

However. That’s not quite all he did…

END_OF_DOCUMENT_TOKEN_TO_BE_REPLACED 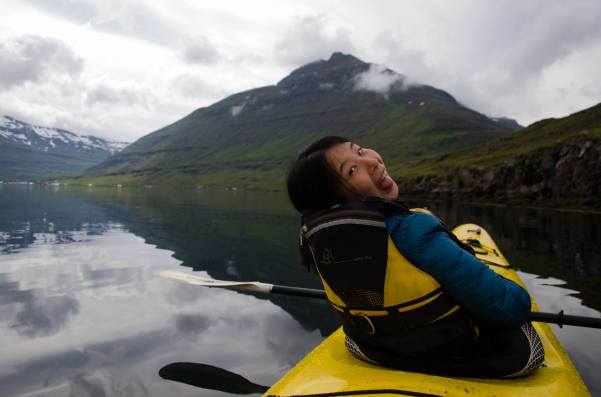 END_OF_DOCUMENT_TOKEN_TO_BE_REPLACED

This will be the second to last post about the most beautiful and refreshing place I’ve ever visited. I will miss a number of things about Iceland, which I will enumerate in my last post, but can be summed up as: how the hell did this little island slip my travel plans. It was only because of Mr. Chokkattu that I thought of this place at all as a potential destination and that’s insane to me now.

We filled our last full day in Iceland with Snæfellsjökull and rounded the trip out back in Reykjavik at the Settlement Museum before we bid the country adieu the next morning. My last glut of pictures, 60 altogether:
END_OF_DOCUMENT_TOKEN_TO_BE_REPLACED

After the mild debacle the other night, we woke up bright and early and headed to Myvatn under the advisement of the two young women we had met the day before even though we had planned to skip it because of the time we lost. Also as a result of the night before and how lovely and helpful everyone was, we decided to pick up two hitchhikers heading to Dettifoss as we were going to drive in that general direction to Myvatn anyway.

They were a couple that met in Sweden at a landscaping and architectural school, a young man from France, and a young woman from the Czech Republic and beyond comparing our experiences in school (it costs too much, and you learn way more working) and discussing summer employment in Iceland (they both worked at Jokulsarlon, him a boat guide, and her a waitress at the cafe), they recommended us head to the Nature Baths in Myvatn, which is similar to the famed Blue Lagoon except much less expensive.

END_OF_DOCUMENT_TOKEN_TO_BE_REPLACED

This was both the best and worst day of the trip. We started out wonderfully with a lot of time in my new favorite town, Seyðisfjörður, where I finished the Iceland Day 2.2 post in the Hotel Aldan restaurant and had my first taste of reindeer, which was delicious. We kayaked for a couple of hours and met Mr. Hlynur Oddsson, our guide (the kayak guy, as informed by a waitress at Hotel Aldan) who was as kind and as funny as he was educational. Mr. Chokkattu was also able to wash our car for free, which is good because our little 2×4 was definitely begging to get clean after being covered in mud and dust from our drive. We also got to sing in Tvisongur, which we were told means “Double song/singing” and Mr. Chokkattu lent his lovely bass to the environment and I pittered out my minimally trained alto as accompaniment.

Later on, we had a delicious dinner at the Skaftfell visitor’s center, which also housed some interesting local art I recommend checking out if you go.  END_OF_DOCUMENT_TOKEN_TO_BE_REPLACED

Obviously, I didn’t really go through with the updating every day thing because of the lack of strong WiFi and time, but I have finally finished editing day 3 pictures, so here you go! It was a little chillier on day 3 than the previous two days, and we saw a little less civilization and a few more sheep, which Mr. Chokkattu and I enjoyed. Day 3 consisted mostly of water and ice, but there were lots of rocks and mountains as well, and I’ll include a bonus gallery about mountain flowers too!

END_OF_DOCUMENT_TOKEN_TO_BE_REPLACED

This will be quick because our day’s already started, but I just wanted to finally share some of the things I saw Thursday now that I have some decent Wifi. I don’t have a chance to edit, so you’ll see my awkward photography skills in all their raw glory (check out Mr. Chokkattu’s blog for better pictures)! Names and everything should show up in the captions, I hope you all enjoy!

And for my scented folk; I’ve been wearing Annick Goutal’s Eau de Camille this entire time. Light, crisp, beautiful, and slightly sweet; just the thing to counteract the Seltun sulfur field and blend in with the grassy meadows and stony fields around us! Also, there’s a lot of lavender in Iceland, so while you’re walking through the fields, you’ll randomly get hits of sweet and spicy real lavender. It’s gorgeous.

END_OF_DOCUMENT_TOKEN_TO_BE_REPLACED

It’s a little too late to do a whole post now since we’re hoping to see Skogafoss at sunrise, but I just wanted to say I was blown away at the kindness shown today. We’re sleeping in the car tonight and tomorrow we’re waking up to a beautiful waterfall! Good night, everyone.